“We regret that we have to give you some bad news. We have discovered that your grandfather’s name appears on the U.N.W.C.C. list of war criminals.“

It all began with the request for a transcription of a text from the beginning of the 19th century. But, as we know, one thing leads to another.

A customer contacted us at the beginning of 2019 because he wished to understand the content of certain registers from a boarding school, drawn up in highly complex handwriting. He applied to Galactus Translations, the transcribers got busy and the customer was very satisfied.

From transcriptions to archive research

He contacted us again the following year with further orders for transcription and translation. This takes us to spring 2020. The forced quarantine had just ended. During this period, many of us had dedicated time, a lot of time, to activities we would never have dreamed of doing. Our lives slowed down, we were in lockdown with our families, we spoke more often with our grandparents, our parents or with distant people. Many of us set about reordering old photos or sifting through those tiny treasures that had been relegated for years to a dusty old box in the attic or the cellar. Last May, our faithful customer contacted us again with an unusual request. He had found, in an old box, a newspaper article on the Second World War in which his grandfather was mentioned. A few black and white photos, somewhat faded, portrayed him in uniform in a country that did not seem to be Italy. He wanted to know more.

We began our research. We found the subject increasingly fascinating. We discovered that the customer’s father had been sent to Greece during the Italian occupation of those territories from 1940 to 1943. He was put in charge of various tasks. His Army Corps was ordered to repress revolts and carry out searches and round ups. But it was also responsible for security in the concentration camps. The exact definition of these by the Italian military was “concentration camp for preventive detention” or simply “prevention home”, a significant name, considering that the detainees were above all political prisoners and presumed communists. Thus we discover that, in the Italian occupation zone, the Andartes (i.e. Greek partisans) were particularly active.

Galactus Translations was born as an agency for translations and transcriptions of ancient texts, but in recent months it has expanded its activities, embracing the sector of historical and archival research. And so, with determination and high commitment, it began to send letters far and wide on behalf of the customer’s family, ruffling many waters: Greek authorities, Italian historical archives, Greek and Italian scholars and experts on the period, the UN … And, little by little, a world of atrocities came to light. Hidden, silenced, covered up, deviated, falsified. Some original documents have recently been declassified, yet it is far from easy to obtain a permit to consult them. Often, the archive staff cannot be reached, do not respond to requests or simply do not collaborate.

Back in 1994, the journalist F. Giustolisi revealed the presence of a hidden cupboard in a basement of the Military Attorney General’s office, in which were jealously guarded 695 dossiers on atrocities committed by Nazis and Fascists during the war years 1943-1945. This was the notorious ’“Cupboard of Shame”. Why were these dossiers made accessible only in 2016? They contain the names of those responsible for some of the bloodiest massacres, such as those of Sant’Anna di Stazzema.

Galactus Translations’s collaborators continued to read and study hundreds of pages on occupied Greece. The assistance of several military archivists and British and Greek historians was fundamental.

We have all heard frequent stories of massacres in which the Italian civil population were the victims. Information on Second World War atrocities involving Italian armed forces abroad seem to have made fewer inroads on public opinion.

And the “grandfather”? What role did he play? Did he maybe take part in the bloody massacre of Domenikon? A massacre for which, among other things, nobody has ever paid. The case was closed only two years ago, showing the extent to which these wounds still affect us and remain open in the memories of the victims’ descendants.

We are waiting to discover further details and receive confirmation of places and motives. But of one thing we are certain: that name is in the UN list of war criminals. The charges are down in black and white and are conserved with the “Commissione sulle cause dell’occultamento dei fascicoli relativi ai crimini nazifascisti. [Italian Parliamentary Commission on the Causes of the Suppression of Dossiers on Nazi-Fascist Crimes]”. It was not a pleasure to read them, let alone to communicate them to the family. Galactus, nevertheless, is continuing to investigate and, in its small way, hopes to obtain some answers.

We thank, in particular, Dr. Elena Patarini Slawinska for the determination, competence and professionalism she has shown in the complex activities of archive research. Without her, this project would have been impossible.

We thank Dr. Stelios Pericle Karavis for the precious material he has shared with Galactus, and Prof. Julian Putkowski who pointed the way and guided us in our historical research and provided us with useful information to follow up.

Our thanks to all the archivists we have contacted in Italy and abroad and who are still working to help us arrive at the truth. 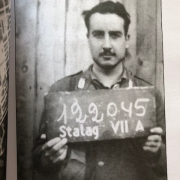 Italian Carabinieri to be eliminated
A Milanese author

Italian Carabinieri to be eliminated
Scroll to top