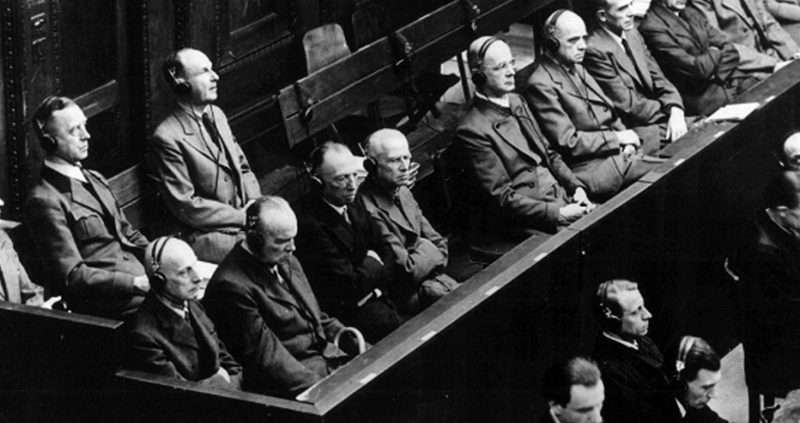 On 20 November 1945, in Nuremberg a historic trial opened against higher-ranking National Socialists who had played leading roles in the crimes against humanity perpetrated during the Second World War.

It was the first time in history – and moreover, in criminal proceedings of the highest significance – that it was necessary to translate the hearings “simultaneously” into four languages: English, German, French and Russian. This had never happened before and nobody up until that time had developed an interpretation technique that would enable the human brain to listen to one language and to reproduce the same meaning simultaneously in another language.

The profession of conference interpreter was born with the Nuremberg trials. In groups of three, these pioneers provided simultaneous translations over eleven terrible months. They worked for many hours a day, with very few breaks, seated in improvised booths and using ad hoc technology set up for the occasion by IBM.

They created a technique that was previously unknown, as they struggled to explain concepts and actions so inconceivable that they were frequently unable to find corresponding terms in the other languages.

Keeping control over one’s own emotions, distancing oneself from the facts and interpreting the language impassively and calmly so that the judges, the lawyers and the public would understand the words of the Nazi hierarchy, was not an easy matter. Some of them felt sick as they did it.

Most of our interpreter colleagues who worked in Nuremberg are destined to remain nameless and faceless. In a few cases, AIIC  has succeeded in finding information and photos with the help of descendants, recent specialized publications and some unpublished works. Among these, we may mention the splendid L’interprète de conférence – Cet Inconnu by S. Priacel,who, while still a soldier, was called upon to place his linguistic skills at the service of the Nuremberg trials. The material resulting from the AIIC research was used to organize an interesting travelling exhibition with various stages in Europe, including Milan in May 2017.

We hope this homage to the history of our profession will provide useful food for thought. For a world without cultural barriers, in the hope that this will not remain only a dream.

The transcriber of the Isle of Man
Scroll to top